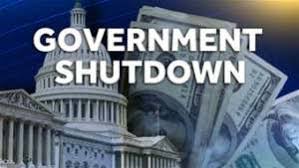 Investors face the possibility of a government shutdown this weekend.  Since we do not sit in Washington, we can only observe the Congressional antics from afar.   As I write this on Friday afternoon, the odds of a federal government shut down keep growing.   At the same time, according to the New York Times, democratic senate leader, Charles Schumer, will meet with President Trump shortly.

Yesterday (January 18th,) the house passed a four-week extension, of Federal spending authority to February 16th.  At this point, the extension now faces Senate consideration where there exists firm Democratic opposition to the extension without an agreement on the DACA program.  This Democratic opposition arises, in part, from a small group of potential Senate Democratic presidential candidates.  These senators recognize that the DACA program represents a key issue for their Democratic base.  Therefore, they threaten to filibuster any effort to pass the extension as currently proposed.  Such a filibuster would require 60 votes to invoke cloture—which would require all 51 Republican Senators plus nine Democrats—an unlikely event.

An alternative to the four-week extension would be an extension of a few days.  As of this writing, this seems to be the most likely alternative.  However, in the chaos of Washington, some republican senators indicate they may oppose this alternative.

If both efforts fail, then a partial federal government shutdown will occur.  Historically, such shutdowns showed a modest effect on the economy.  Goldman Sachs estimates that each week of the partial shutdown would cost the economy 0.2% of g.d.p. growth q/q.  In any case, this may not prove to be meaningful as first quarter g.d.p. results, each year, suffer from seasonal adjustment issues.  Bottom line, we do not expect the economic impact will be easily measured.

The current unsettling debate in Congress brings up two issues.  First, will Congress go through more turmoil in early March when it must consider raising the debt limit?  Of more concern, will the obvious unwillingness in Congress to work out their differences, lead to an even lower probability of enacting infrastructure legislation this year?  In addition to the need for infrastructure improvement, some economists expect such legislation would provide further fiscal stimulus in 2019.

Overall, we would not expect a major impact on the financial markets from the shutdown itself.

Disclaimer: Any distribution, copying or disclosure of this email is prohibited. The contents of this article should not be construed as investment advice, unless explicitly stated. Further, this information is not intended as an offer or solicitation for the purchase or sale of any security. Neither data nor other information contained herein (or in the attachments) are warranted as to completeness or accuracy and are subject to change without notice. Any comments or statements made herein do not necessarily reflect the views of Skyview Investment Advisors LLC. It should be noted that internet communications are not secure and subject to possible data corruption, either accidentally or on purpose, and may contain viruses. Finally, to the extent that performance information is contained herein, past performance is not necessarily indicative of future returns.