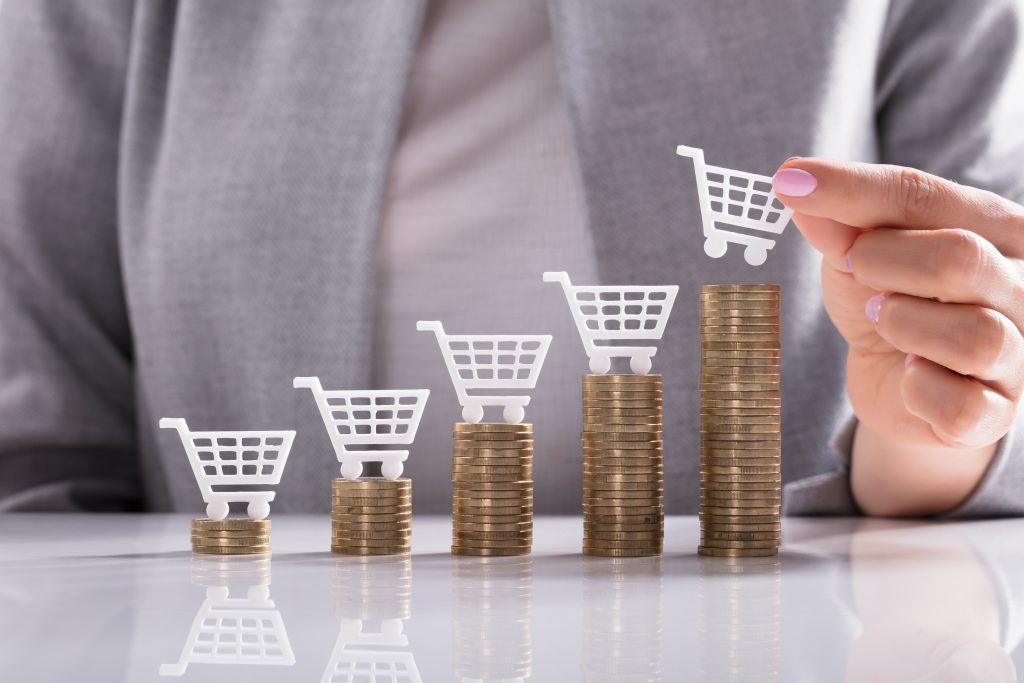 The Federal Open Market Committee (FOMC) meets on July 30-31. An important policy consideration will be boosting price inflation in an attempt to reach their sustained 2% symmetric objective. The FOMC basis its symmetric inflation objective on averaging past levels of inflation. Many economic observers question why inflation fell short of their stated 2% target in light of interest rates remaining near the lower bound for years while at the same time the economy both achieved what seems to be full employment and exceeded its estimated potential growth rate of close to 2%.

With that objective, the outlook for inflation remains somewhat mixed; Y/Y core personal consumption expenditure (PCE) inflation rate remains below the FOMC’s goal of 2% (see Figure 1). In contrast, Figure 2 shows the headline PCE index for the most recent 3-month annualized rate reached about 2.5%. With recent inflation generally below 2%, the FOMC will likely return to stimulative monetary policies to achieve its sustained inflation rate objectives. These policies would include rate cuts and ending balance sheet reduction at the end of July. The FOMC will likely do both so that their policies do not work at cross-purposes. Much Fed speechifying will likely follow these two actions over the next month. After Labor Day, the Fed will likely provide guidance as to when it will return to pumping up its balance sheet through incremental asset purchases (QE). 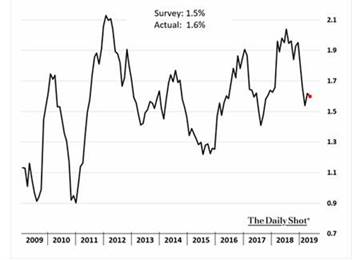 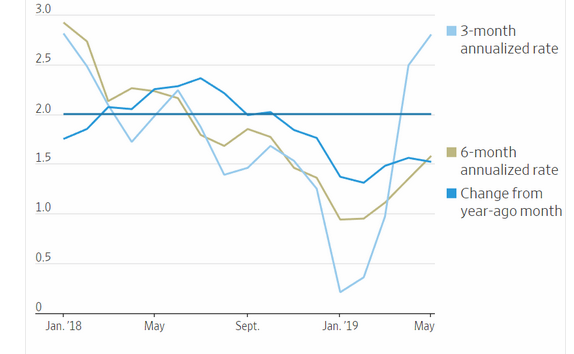 The FOMC Concern with the Current Low Level of PCE Inflation

If PCE inflation remains below 2%, then business and consumer inflation expectations would likely continue to fall (see Figure 3). Those falling expectations can heavily influence the direction of prices and wages thereby further depressing the rate of inflation. The resulting domino effect could lead to additional funds rate cuts further narrowing the FOMC’s leeway for heading off a future economic downturn. 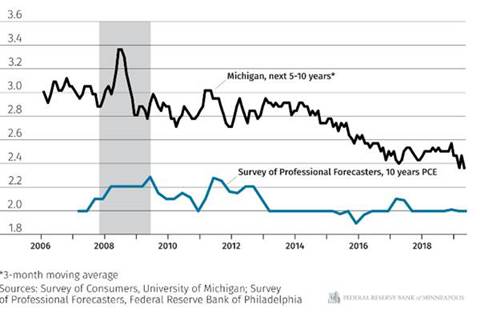 A possible funds rate cut late this month represents a rapid change in stance for the FOMC from late last year when it increased the funds rate. As a result, a possible rate cut this month may cause some to suggest the FOMC shifted based on White House pressures. At the same time, others look at the current relative strength of the economy and see little immediate need for a rate cut. Instead, they call for the FOMC to husband their accommodative monetary policy tools until economic data call for their use–not just for so-called insurance purposes. Countering this view, others call for more than a 25bp cut in the funds rate. They see the trade dispute slowing world economic growth as well as causing U.S. businesses to cut back on their investment spending. Therefore, they see the urgency for a greater rate cut than now seems likely.

The Trade War — Negating the Inflation Benefits from Technology and Globalization

The influence of both new technologies and globalization on reducing inflation needs more study. At the same time, the trade war may reverse their beneficial influences. In the case of technology, the trade war may lead to a potential bifurcation between the U.S. and China in their development of future information systems technologies. Bifurcation thus could reduce open global system access, which, in the past, played a critical role in increasing global information system efficiencies. In the case of globalization, populism’s impact in constricting freer trade agreements may also reduce its moderating influence on inflation.

For the second half of the year, the investment outlook will depend importantly on both earnings performance as well as the headlines from and the eventual outcome of the trade agreement negotiations. Currently, the outlook for both earnings and a trade agreement remains cloudy. Assuming the FOMC cuts the funds rate at the end of July; investors will likely assume greater credit risks to earn higher interest income. At the same time, if FOMC policy changes succeeds in boosting inflation, longer duration fixed income investments may suffer if interest rates move up in response. Therefore, greater credit and interest rate risks induced by dovish monetary policies lead us to continue to favor a balanced portfolio of equities, fixed income, and alternatives. In the equity mix, focus on quality companies marked by higher rates of returns on equity, low financial leverage, and steady earnings growth – selling at “fair” market prices. From these comments on greater credit and interest rate risks, we favor shorter-duration fixed-income investments.