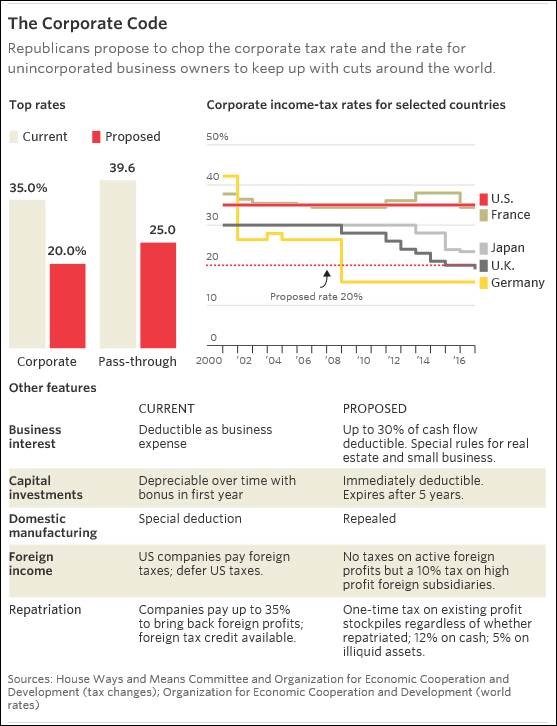 The house ways and means committee released its 82 page Republican tax reform proposals “Tax Cuts and Jobs Act.” These proposals did not come from Mount Sinai written in stone so much will change before they pass through Congress—if they ever do. The following is a brief review of some of these proposals.  This represents a quick read of the document.  Trite, but true, the devil will be in the details.

The following graph from the Wall Street Journal gives a visual summary of some of the changes for corporations and businesses.

In the most important change, the largest shareholder in most corporations, the federal government, will reduce its interest by reducing the corporate tax rate from 34% to 20% immediately.  In my view, as important and perhaps even more revolutionary, the U.S. will move from a global to a territorial taxation system.  As a result, U.S. global firms will no longer pay taxes on their future non-U.S. profits.  On their past international earnings, there will be a one-time tax of 12% on cash and 5% on retained earnings.

Taxation on pass-through businesses, S corporations and partnerships, would be at a 25% rate for what would be considered passive income.  As an example, working members of these businesses would be taxed at an earned income tax rate for 70% of their pass-through income.  The remaining 30% of that income would be considered passive and taxed at the 25% pass-through rate.  Professional services, lawyers and financial professionals, would not benefit and be taxed 100% of their earned income tax rate.

Under the proposal, businesses could fully expense 100% of their capital investments.  This would apply to investments made after September of this year through the end of 2022.

The following graph from the Wall Street Journal gives a visual summary of some of the changes for individuals. 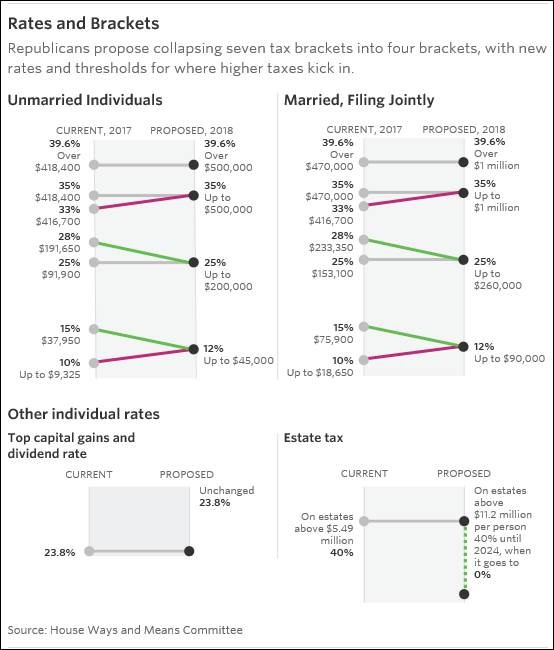 Individual tax rates:  as the table shows, the highest rate—39.6%–would now apply to married couples with incomes over $1 million compared to $470,000 currently.

The key changes that may bring the greatest impact show up in the deductions.  I outlined some of the most important ones.  At the same time, there are many pages listing elimination of various deductions.  However, the charitable deduction remains with a cap.

Standard deduction:  for married couples, the proposal nearly doubles the standard deduction from $12,700 to $24,400. The proposed legislation lays out similar percentage increases for heads of households and singles.

State and local taxes:  deduction limited to $10,000 and only for property tax.

Mortgage interest:  limited to loans up to $500,000 on new home purchases.

Estate tax: the proposal immediately doubles the estate tax exemption to $11.2 million for an individual.  It would also repeal the estate tax in 2024 but retain the “step up basis” for determining capital gains taxes.  Very simply, this means the cost of an asset would be determined at the date of death and not when originally bought.  Retaining this provision while eliminating the estate tax comes as a surprise.   Our recommendation, eat healthy food and exercise.

I outlined just a few of the changes.  Each industry group will be actively lobbying to changes they cannot support.  If you cringed at the noise currently coming out of Washington, you will need Bose head phones to protect yourself during the next few months.  Moreover, we used “few months” because it seems very difficult to conceive of how this tax legislation will pass through Congress by year-end.   If nothing else, the lobbying class in D.C. will see a major increase in their incomes.

Our last commentary suggested tax reform would likely prove very important for the economy and financial markets in order to offset the rolling back of the fed’s accommodative monetary policies. If these proposals make it through Congress, lower corporate tax rates will increase their earnings—particularly for domestic firms—in a range centered around 10%.

The importance of moving to a territorial taxation system combined with the lower U.S. corporate tax rate will likely bring many positive surprises.  If nothing more, it should increase the willingness of both U.S. global corporations and non-U.S. corporations to increase their investments in this country.   Therefore, the growth of domestic capital investment spending should prove to be a measuring stick for this change.