This morning (August 14), the U.S. 10-Year/2-Year yield spread briefly inverted. Inversion means that the 2-Year Treasury Bill paid a higher interest rate than did the 10-Year Treasury Note. That inversion reversed itself quickly. Many see the inversion of Treasury bond yields as a good forecast of recessions — but not necessarily in the short-term. According to Credit Suisse, a recession occurs typically 22 months following a 10-Year/2-Year inversion (see Figure 1). 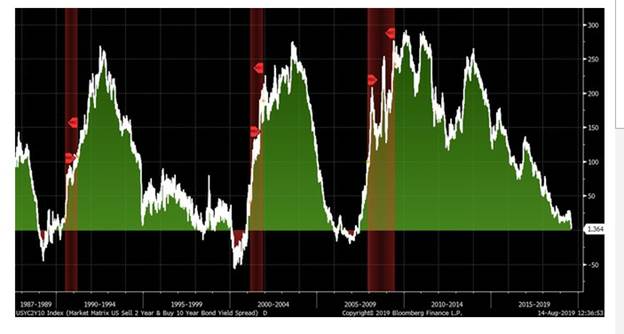 The New York Fed’s Recession Probability Index also shows an increased probability of a U.S. recession (see Figure 2). However, our prior commentaries showed that a better predictor might be when the unemployment rate bounces off its current low for several months (see Figure 3). So far, the unemployment rate remains at nearly historic low levels. 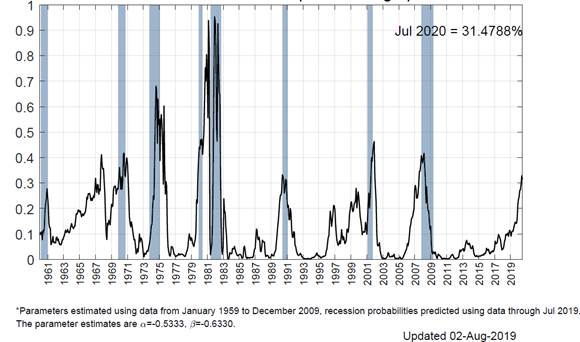 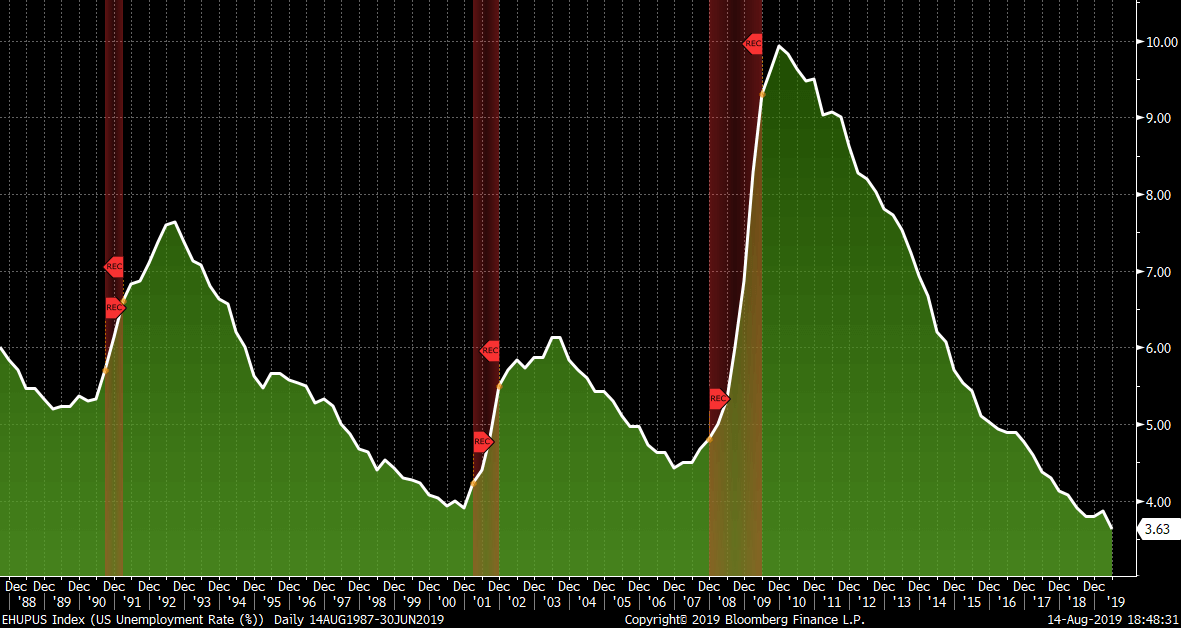 This delay will enable importers not only to build inventories for this year’s holiday season but also to add to inventories for the first quarter of 2020. Such an inventory increase will mimic last year’s inventory build before the then threatened January tariff increases. The inventory stocking will likely prove an elixir for the trucking industry. Second half GDP may also produce front-loaded growth in the third and fourth quarters, similar to last year. At the same time, such pre-building of inventories will likely depress 2020 first quarter growth.

The partial tariff delay gives the administration more time to attempt to resolve trade issues with the Chinese. At the same time, the delay pushes any tariff increases into the 2020 presidential election year. That election sensitivity could bring increasing pressure on the administration to resolve the trade issues or at least seek a partial settlement before the election.

Certainly not elections for President Xi but economic pressures may also be building up for him to consider resolving the trade issues. Yesterday (August 13), China’s July industrial production (IP) came in below expectations (see Figure 4). Year-over-year IP growth slowed to 4.8% Y/Y compared to 6.3% Y/Y in June. Retail sales in July also slowed on the back of declining auto sales. July economic results trail below China’s GDP target of 6-6.5% growth. To move it back to that target range will require increased government and central bank support. One additional stimulus will be greater than normal exports to the U.S. to support the inventory build in this country to beat tariff increases.

The consensus view on trade negotiations concludes that no settlement will be reached until after the American presidential elections. From our perspective, if the trade issues continue to pressure Presidents Trump and Xi, admittedly for different reasons, perhaps that will bring an end to the global game of chicken being played by these two leaders—no doubt a growing long-shot outcome.

The uncertain economic outlook resulting from the trade war produces a shortage of both growth and yield for investors. In markets trading day-to-day on the latest headlines and tweets, trying to guess at the next day’s tweets or headlines makes little sense. Instead, focusing on the long-term outlook for quality companies makes the most appeal in the current volatile equity markets. Importantly, seeking out such companies should focus on earnings and dividend growth at attractive stock values and dividend yields. Those equities should fit into a portfolio mix equally balanced between equities, alternatives, and fixed income securities. In our view, this provides the best mix of offense and defense in a market influenced by these daily headlines and tweets.