In 2016, we saw the populist vote on the right help to elect a Republican president. Two years later, the populist vote, this time on the left, shifted the house from Republican to Democratic control. These two elections created the heated mix that led to the partial government shutdown and to even greater dysfunction in Washington on many other issues.

Eventually, the populists influenced trade war and partial U.S. Government closing could put a damper on the U.S. Economic momentum carried over from 2018. More specifically, Bloomberg consensus estimates for 2019’s first quarter growth recently declined sharply to 2.16% (see figure 1.) This would represent a significant drop from the 2.6% GDP growth forecasted for the last quarter of 2018. 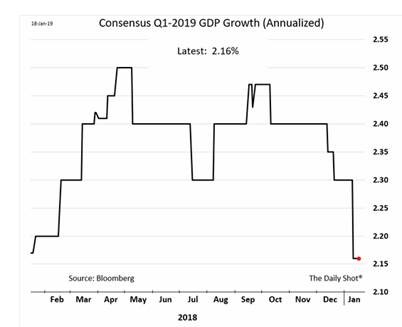 Political confidence importantly underlies the usual factors that drive both the economy and financial markets. Lacking political confidence, markets can falter and the economy suffer. The current populist driven split within this country reduces the political will to resolve differences on domestic issues as well as the trade war with China. That absence of political will undermines investor and business confidence in the leadership in Washington. Nonetheless, we remain cautiously optimistic that at least one domestic issue as well as the trade war can be resolved early in the year. However, there remains some possibility that their resolution could turn out unfavorably from the perspective of both investors and business leaders. This could prove particularly troublesome if the dysfunction in Washington ultimately leads to a greater than projected economic slowdown.

Where does the economy now stand?—Consumers financially strong

Both employment—a lagging or coincident indicator–and wages remain strong (see figures 2 and 3.) Adding to first quarter income will be increased tax refunds generated by last year’s over withholding as a result of the new tax law. The G.A.O. estimates nearly three-quarters of taxpayers over withheld during 2018. Besides incomes, their comfortable financial positions—particularly compared to corporations–should also encourage consumer spending (see figure 4.) However, the question now arises whether the increasing disputes in Washington will ultimately pull-down consumer optimism and thereby short circuit their important spending contribution to economic momentum. 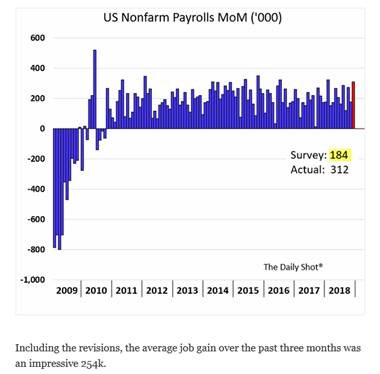 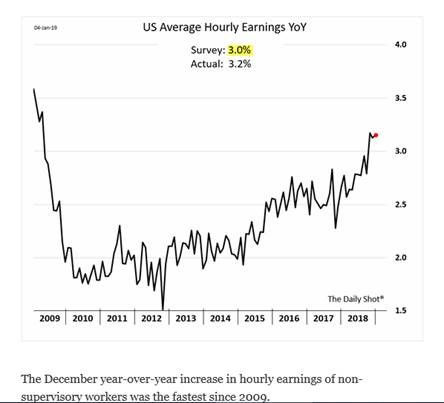 The first cloud over consumer optimism showed up with the decline in the recent University of Michigan consumer sentiment index (see figure 5.) The index dropped to its lowest level since Mr. Trump’s election. This downward shift likely reflects, among other factors, trade war headlines and December’s stock market decline. As a result, despite their comfortable financial situation, less buoyant consumers may save more as opposed to opening their wallet and spending. In addition, increased stock market volatility and its potential negative wealth effect may test upper income spending.  If this proves the case, sales of travel, entertainment, and restaurant services along with luxury goods might suffer. 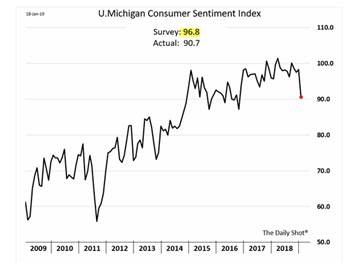 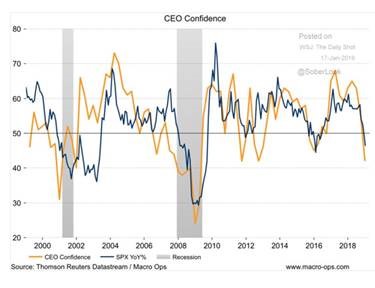 The Trend in Capex Plans Has Moderated in Recent Months 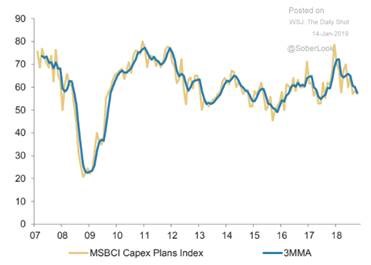 Settlements of the partial government shutdown and eventually the trade war should bring positive short-term financial market reactions. Longer term, increasing investment uncertainty will likely reflect the maturing economic cycle and a possible slowing economy later this year. Recognizing these longer-term uncertainties, our investment strategy calls for an equal asset mix of equities, alternatives, and short duration fixed income securities. Among equities, stocks of corporations that can maintain consistent earnings growth at attractive valuations should benefit from the possible shortage of economic growth. We debated within ourselves whether to lengthen, modestly, the fixed income asset duration. This consideration reflects the growing likelihood the Federal Open Market Committee (FOMC) ends its rate hikes in 2019 with the possible economic slowing later this year. Our internal debate will continue, and we suspect modestly lengthening duration will eventually win out.