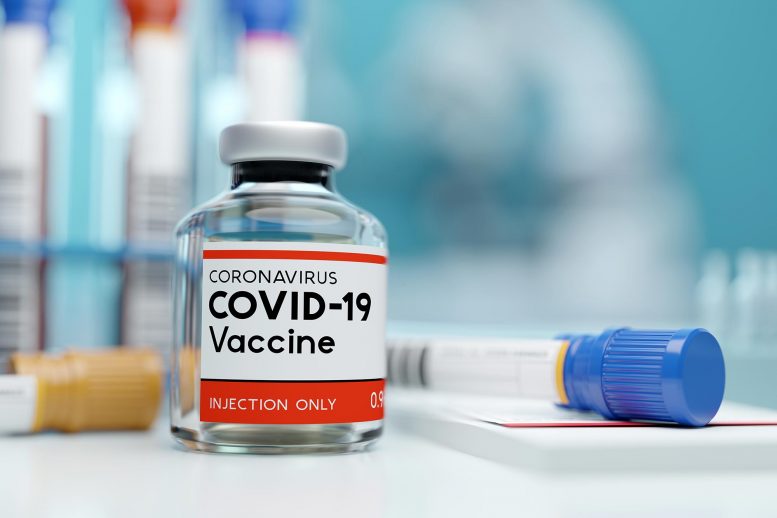 Since new virus cases peaked nationally early in July, the number of new cases continues to decline (see Figure 1). July’s resurgence flattened the expected economic recovery for the third quarter as consumers showed less comfort with leisure activities (see Figure 2). Third-quarter GDP results will likely depend on the speed of economic recovery past the peak level of reported new COVID-19 cases and the timing of a new fiscal package – likely delayed until early September after the national political conventions. 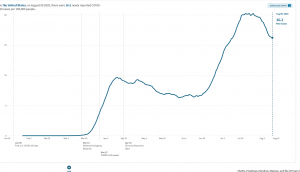 The following statement appeared in our March 25th commentary, “how stretched out the economic recovery ultimately takes, in our view, partially depends on medical solutions for the virus that will relieve consumer concerns.” That statement still rings true. After the July FOMC meeting, Fed Chair Powell reflected our earlier views when he put emphasis on how important the development of a broadly available vaccine will be to economic recovery. In a CBS interview, he said, “for the economy to fully recover, people will have to be fully confident. And that may have to await the arrival of a vaccine.” This will prove true not only for the United States but also for quickly bringing growth back to the global economy.

Global vaccine development is broadly underway in a number of countries (see Figure 3). The U.S. will spend over $10 billion on potential vaccines. With such spending, the U.S. will secure more than 1.5 billion doses of potential vaccines. Obviously, this number represents a multiple of the U.S. population. Very simply, that excess number of doses offsets the uncertainty as to which of the developing vaccines will work. Also, as part of this diversified effort, many of these vaccines employ different technologies. As vaccine trials proceed, investors will focus on key milepost dates to monitor their progress. As each trial reaches specific milepost dates, volatility for specific biopharma stocks will likely increase just before and after those dates. 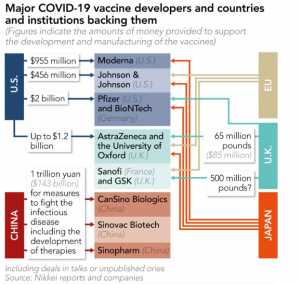 Post Vaccine Economic Growth In 2021 Depends on How Economy Fares In the Pre-Vaccine Period
With successful vaccines, broad-based distribution in this country would likely begin sometime in the spring of 2021. How rapidly the economy then rebounds in the second half of next year will importantly depend on how the economy fares before the broad distribution of vaccines. Ultimately, that depends on successfully containing pre-vaccine virus spread – empirically not an easy task in the U.S.

With the growing likelihood of positive vaccine developments by year-end, cyclicals such as industrials, as well as stocks broadly categorized under the term “value” should gain increased attention. In addition, crowd density consumer services and their stocks should also particularly benefit. At the same time, financials such as banks may not benefit to the same degree as other value and cyclical stocks if the interest rate curve remains compressed.

Resumption of Merger and Acquisition Activities

Post COVID-19, “The New Century,” big companies will get bigger — faster. Market-dominant firms will either acquire weaker competitors and suppliers, or those companies will most likely disappear. At the same time, improving business confidence will likely come along with the growing probability for successful vaccines. With that, cash-rich dominant companies will once again turn to acquisitions. The Wall Street Journal recently reported that U.S. public companies showed cash holdings of $2.54 trillion during the second quarter of 2020 compared to $1.86 trillion in the same period last year. In addition, according to Bain and Company, the tech sector roughly doubled its average cash holdings to nearly $10 billion over the last decade. With cash burning holes in corporate pockets, merger and acquisition activity should recover from its recent slump (see Figure 4). If this trend proves true and “bigs” get bigger, even greater pressure may be placed on Federal authorities to reverse some of these trends. 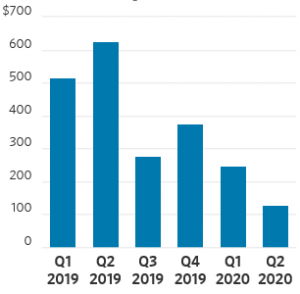 Bigs Bump Up Against Bigs

At the same time, as the “bigs” get bigger, they will likely bump up against each other competitively. As a modest example, Figure 5 shows that two companies — Facebook and Google – already control half of digital ads. In our view, as the probability of larger clashes grows among the “bigs” over this decade—such as in cloud services—their growth rates may come under pressure. This potential convergence could lead to a rerating of what investors will pay for the stocks of companies thought to demonstrate unlimited growth potential. 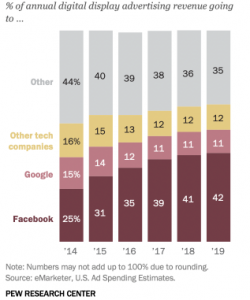 The growing probability that vaccines will bring the virus under control increases the comfort economist and investors will likely exhibit with their outlook. As that occurs, investors will then broaden their investment focus. This would lead to greater investments in cyclicals such as industrials, so-called value stocks, and a broad swath of consumer services. At the same time, “The New Century” — see our prior commentaries — will bring greater opportunity for the dynamism and ingenuity of American businesses and workers to take advantage of the rapid changes that will likely occur.

Overall, our investment asset mix remains unchanged — 40% equities, 35% alternatives, and 25% fixed income. Within that equity mix, in addition to the groups we listed earlier, quality companies that will take advantage of these changes and show long-term above-average growth should continue to come out big winners. In the case of fixed income, we continue to recommend short-term credits to preserve capital and in the likelihood of an improving economic outlook. Finally, alternatives fit ideally into the environment described in this and our prior commentaries.