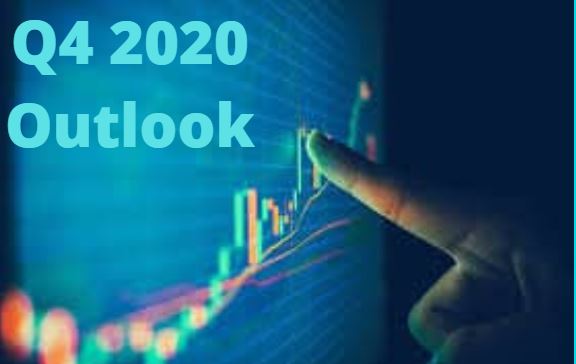 The outcome of fourth-quarter events will likely prove very key to the economic, political, and COVID-19 outlook for 2021 and 2022. At the same time, absent incremental fiscal spending for at least part of the fourth quarter, sequential economic growth will likely flatten in the quarter. Despite limited incremental fiscal spending, early cyclical industries such as housing and autos, as well as inventory rebuilding, should still continue to show gains sustaining modest fourth-quarter economic momentum. Figure 1 shows the quarterly real GDP growth forecasts from oxford economics, which represent similar outlooks for many economists (see Figure 1). 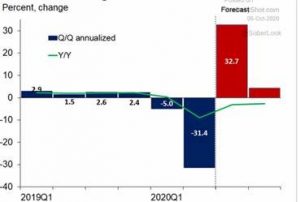 Presidential election polls continue to show former Vice President Biden maintaining a comfortable lead. Therefore, concerns about a lengthy period before determining an eventual winner seem somewhat less of a concern. Increasing use of early voting would also make it more difficult than in the past to reverse these polling trends. If one or more vaccines hopefully shows success in the fourth quarter, their positive future economic impact will likely prove more important than the presidential election outcome. Finally, the potential for a second COVID-19 cold weather wave could produce regional and local hot spots forcing some business closings — suppressing economic growth. These lockdowns would add additional spice to the fourth quarter stew.

Most investors seem to be positioning for a Democratic election sweep. If that proves correct, it will likely ensure substantial new fiscal spending early in the first quarter of 2021. Our past commentaries pointed out that the economic outlook post broad distribution of vaccines — likely sometime in the second quarter of 2021 — would depend importantly on economic momentum pre-vaccine.

Beyond COVID-19 and with a vaccine, the “New Century” will also bring about changes resulting from, among others, increasing use of digitization, automation, the broader commercial and industrial application of 5G networks, and the expanding influence of artificial intelligence and big data inputs. These influences will more quickly revolutionize and disrupt many industries and cause others to shrink or disappear. If this proves correct, U.S. productivity would likely improve when compared to the last decade — to the benefit of U.S. economic growth — as zombie corporations disappear.

With broad-based vaccine distribution likely by mid-year, consumer service industries should see a rebirth. Many of these industries, including restaurants, leisure activities, and travel, among others, depend on crowd density for their business success. Crowd density, at the same time, produced super spreading of the virus, forcing closings and then eventually opening but with significantly reduced capacities. Shutting down many of these consumer services also produced the greatest increase in unemployment for any industry sector, particularly among low skilled workers. Sharply reduced consumer service business activities tempered the employment recovery of low-skilled individuals (see Figure 2), particularly in the leisure and hospitality industries (see Figure 3). 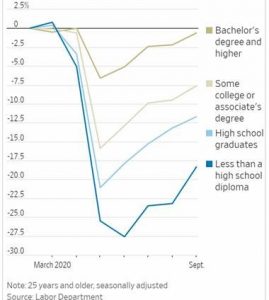 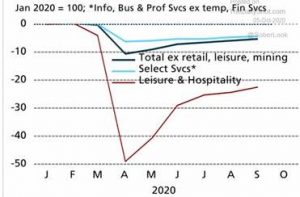 As a whole, the fourth quarter will hopefully produce at least one successful vaccine and the likelihood of increased fiscal spending in the fourth or early in the first quarter. Both a vaccine and new stimulus programs should lead to an improving economic outlook, particularly for the second half of next year and 2022. With that outlook, we continue to expect a broadening positive outlook for cyclical stocks for some period of time.

Many investors also look to traditional value stocks in this environment. We expect more rapid disruptive technological forces resulting from the changes brought about by COVID 19 will likely reduce the economic value of many assets carried on the balance sheets of such companies. In our opinion, this may limit the recovery for many such traditional value stocks.

Both likely new fiscal programs and hoped for broad-based vaccine distribution should lead to a cyclical recovery into 2022. Debt hangover resulting from funding new fiscal programs will likely lead to reduced long-term potential growth for the U.S. economy. If this proves correct, then financially strong quality companies with a foreseeable steady growth outlook make sense for investors past the first stages of economic recovery.

The cyclical recovery will likely lead to rising interest rates in reaction to possible signs of gradually increasing inflation. With that outlook, investors should stick with short-duration fixed-income investments. This will avoid the price risk long duration debt faces from rising interest rates. With our long-term concerns that U.S. growth rates will once again become subdued, long-duration fixed-income debt may then become more attractive once past the recovery cycle.