Tariff Hike – A White House Shot at the Fed?

The end of Zero Bound in the US? – Consumers Now more than Ever Key to Economic Growth

July 31, the Federal Open Market Committee (FOMC) lowered the target range for the Federal Funds (Fed Funds) rate by 25 basis points (bps) to a range of 2-2.25%. The rate cut reflected a round trip from its rate hike of 25bps last December. At the same time, the Committee also ended reducing its balance sheet August 1 –  two months earlier than previously indicated.

Next Day Threatened Tariff Increase — a Message to the FOMC from the White House?

On the next day, August 1, President Trump threatened to raise tariffs 10% on the remainder of $300 billion of Chinese imports on September 1st. That announced increase, if carried out, likely increases the probability of the FOMC cutting the funds rate at least 25bps in September.

Whether intentional or not, his call for tariff increases will likely force the FOMC to meet his demands for greater Fed Funds rate cuts. As a result, many observers look for a 25bps rate cut in their meetings in both September and October. If the FOMC intends to cut the funds rate by 25bps at each of those two meetings, in our view, it makes more sense to make a one-time 50bps cut in September.

2020 Presidential Election Year May Speed Up Rate Cuts this Year

With the presidential election next year, FOMC will likely complete any series of rates cuts by early in 2020, but more likely by year-end to avoid the charge of influencing the election. At the same time, the President takes some political risk with the 10% tariff increase. Figure 1 shows that the new tariffs will apply to popular consumer product categories just in time to potentially increase prices for the holiday season. This short-lead time will also make it difficult for importers to substantially build their inventories before higher tariffs hit.

The tariff hikes, according to commentary inThe New York Times,only affects 0.15% of Chinese GDP. Despite that modest impact, the following Monday China retaliated by permitting its currency to decline about 2% for the first time in over a decade. It did so by stopping stabilization efforts for the yuan. As important, the yuan broke through the symbolic seven-to-the-dollar exchange rate to an 11 year low (a higher exchange rate represents a depreciation in the yuan’s value). China also announced it would stop importing U.S. agricultural products.

Currency Move – China’s Message:  It Will Not Kowtow to U.S. Bullying

China took these steps to send a message that U.S. bullying in the China shop — so to speak — will not bring positive results to the Sino-American dispute. At the same time, officials seem to suggest that this currency move would not be in one direction. The next day, the exchange rate for the yuan moved back under seven to the dollar.

At the same time, China will take substantial risks if it permits the yuan to weaken much further. A recent report in theSouth China Morning Postsuggested the new round of tariffs would greatly affect many labor-intensive industries such as toy and shoe manufacturers. Some already shut down and others will likely move to Vietnam and Indonesia. High-tech companies with less price sensitivity will likely remain in China. A weaker yuan increases the cost of imported raw materials for Chinese manufacturers. It would also pressure consumers with higher prices for imported products. Figure 2 shows the effect of the trade dispute on Sino-American trade through the end of July.

The Wall Street Journalcited analysis by Moody’s that nearly $34 billion of onshore and over $19 billion in offshore bonds issued by Chinese developers either matures or can be put to by investors in the next year. A weak yuan relative to the U.S. dollar would make it more difficult to repay that debt. 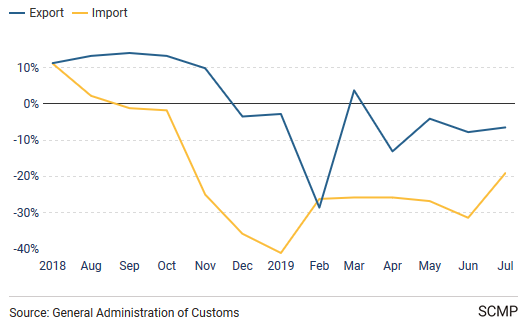 U.S. Designates China a Currency Manipulator Now —But Not In Treasury’s Mid-Year Report

With the yuan breaking the symbolic seven-to-the-dollar exchange rate, U.S. Treasury designated China as a “currency manipulator.” This determination uses a broad range of factors including not only trade and current account imbalances but also foreign exchange intervention plus a list of other factors (see Figure 3). Treasury last used that designation for China 25 years ago. The S&P 500 dropped nearly three percent in reaction to that move.

Interestingly, Treasury issued its semi-annual report in May to Congress and did not cite China or other countries as “currency manipulators.” Most economists would argue that since the beginning of this decade China has made more of an effort to support its currency than weaken it. 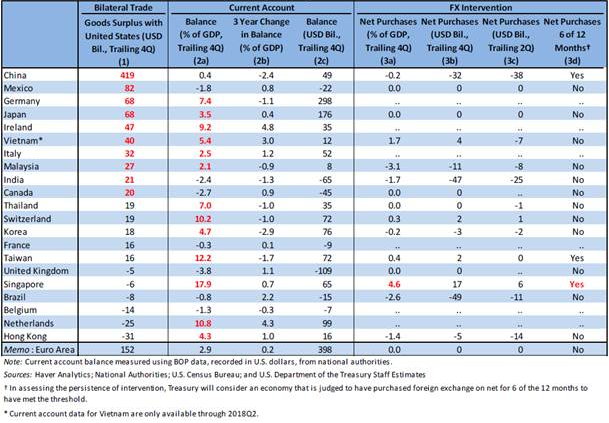 Source: Macroeconomic and Foreign Exchange Policies of Major Trading Partners of the United States—U.S.Department of the Treasury Office of International Affairs

This Time is Different

Yes, this time may be different based on the breadth of negative-yielding debt. The low or negative interest rate policies of the central banks swelled the total of all debt with negative yields. After the FOMC made its most recent rate cut, negative yielding debt — government and corporate – increased to more than $15 trillion for the first time. The value of such debt now accounts for more the twenty-five percent of the entire investment-grade market (see Figure 4). For the first time ever, the 30-year German bund entered negative interest rates territory. 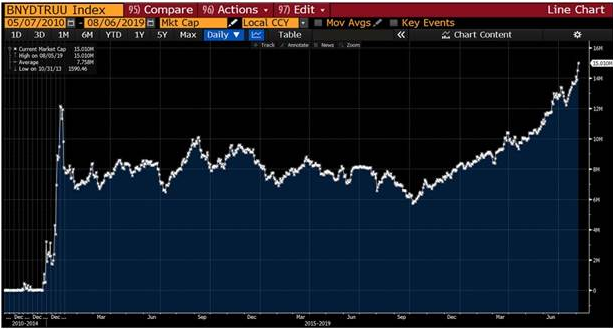 Will Negative Interest Rates Outside the U.S. Strengthen the Dollar?

With the negative interest rates dominating fixed income securities in many developed markets, positive U.S. fixed income yields will likely attract increased investment in U.S. debt from abroad. If this proves true, despite the cut in the funds rate, the U.S. dollar — the global reserve currency – may show some strength against other developed market currencies.

The great global game of chicken marks the nature of the Sino-American trade war. The two Presidents will determine the outcome of that game. Therefore, for the most part, the outlook lies outside “normal” economic and financial modeling and forecasts.

At the same-time, two-thirds of the U.S. economy lies in the hands of consumers. The key question remains how long those hands will continue to open their wallets for the spending needed to grow the economy. The current strength of consumer spending reflects their increasing real wages and stable or low financial leverage. The economic outlook between now and year-end will depend on whether consumers will ignore the trade issues and continue to spend based on their healthy finances.

Our continued view looks to the outcome of the trade war as key to the near-term economic, financial, and political future of the United States. With that overriding concern, our recommendation remains a balanced portfolio of equities, alternatives, and fixed income securities.