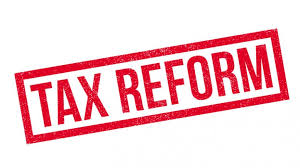 Real life experience for individuals and corporations will determine the eventual answer to that question, not talking heads.  A real-life event will come in February with issuance of new withholding tables.   Average wage earners will then judge the net effect on their take home pay.  Of course, the more comprehensive answer will come with tax filings in April 2019.

The average wage earner will likely benefit from tax reform. Those earners tend to spend –not save—incremental income from either their wage increases or tax reductions.  If this proves correct, then companies focused on that consumer segment should benefit from such increased spending.

Other important real-life inputs will come as business and individual tax payers find various ways to take advantage of tax reform changes.  With the complexity of these changes, the system opens itself up to legal but Olympic level tax gaming.

Many individuals will focus on reducing their tax rates by looking for methods to shift their active incomes to passive ones.   However, you may not have to wait.  The payouts from REITS and master limited partnerships may also qualify as passive income under the new rule.  If correct, for MLP’s, the new rule applies to just that part of their payout that does not represent a return of capital.

The complexity of tax law changes affecting U.S. global corporations will produce a tsunami of fees for major accounting firms.  How about this new tax provision: “base erosion anti-abuse tax” (beat).  Just the name is complex.

For fun, try this tax gaming exercise.  The local subsidiaries of U.S. global corporations might issue debt in countries with higher tax rates than the new lower U.S. rates.    The following table shows the corporate tax rates for major countries higher than the new U.S. rates.

Subsidiaries of U.S. global corporations could achieve a greater after-tax interest expense benefit by issuing debt in these higher taxing authorities.  This represents a reversal of past practices when U.S. tax rates were relatively higher.   If this meets tax code requirements and some corporate debt origination shifted to Europe, then European financials such as banks and investment banks would benefit.

The real point of this exercise—tax reform will stimulate the creative juices in the great sport of legal Olympic tax avoidance.  This will likely result in less tax revenues and a greater federal deficit than currently expected.

The economy will end the year with great momentum that should carry through the first half of 2018. Various parts of tax reform should help continue that momentum. Therefore, the near-term risk to economic forecasts will likely be to the upside compared with earlier forecasts.

Further fiscal stimulus could result if congress enacts an infrastructure spending bill.  With 2018 an election year, the outlook for passage remains murky. Nevertheless, at the same time, a similar forecast applied to passage of this year’s tax reform.  Finally, if this spending bill passes, infrastructure projects take time to get started so the impact will not likely occur until 2019 at the earliest.  For those patient investors willing to bet on passage, many companies that would benefit remain at modest valuation levels.  Obviously, this reflects investors’ skepticism that congress will take such action.

As we move later into the second half of 2018, more uncertainties may arise as the fed’s normalization pace picks up speed.  Unfortunately, the fed’s simultaneous reversal of its unconventional and zero interest rate monetary policies offers little history for guidance.

Fed Funds rate – more increases than most investors look for

We continue to look for the fed to be more aggressive with the frequency of its rate increases than forecasted by most investors.  Generally, markets project 2-3 increases in 2018.  We expect four as outlined in past commentaries.  This outlook assumes the fed’s less accommodative policies will not bite earlier than sometime into the second half of 2018.  If they bite earlier, then the fed may prove less aggressive.

Q.t. will result in the fed gradually reducing its $4.5 trillion balance sheet to $2.5-3 trillion over three to four years.   By the end of 2018, the fed will let $50 billion of treasury and mortgage backed securities investments mature each month.   This compares to just $10 billion currently.  Therefore, later next year, this accelerating pace may create greater upward pressure on long-term interest rates.

An interesting forecasting dynamic will occur later in the second half of 2018, which creates some interesting questions.

For the economy, will less accommodative monetary tools then bite?

Will the fiscal stimulus from tax reform moderate the potential monetary policy bite?

Looking at equity markets, higher interest rates could begin capping stock multiples later in the second half of 2018.   In that case, earnings growth will prove key to better stock market performance.

For earnings growth, look to domestic corporations that can benefit from a combination of organic growth and reduced corporate tax rates.  This will likely lead you to mid and small cap companies.

In our view, many large cap domestic stocks already rode the stock market wave driven by lower corporate tax rates.   Therefore, with a maturing economy, investors should shift their focus to those large cap stocks with stronger earnings growth expectations or those that perform well during the later phase of an economic cycle such as commodity producers. Perhaps, some actively managed funds may benefit from the focus on greater stock selectivity. No doubt, many will remain skeptical of that possibility.

For fixed income markets, the long end of that market, in our opinion, will face increasing pressure later in 2018 leading to higher interest rates. This pressure will arise from tax reform leading to greater deficits. That will likely require treasury to step up, even further, its issuance of long-term debt.