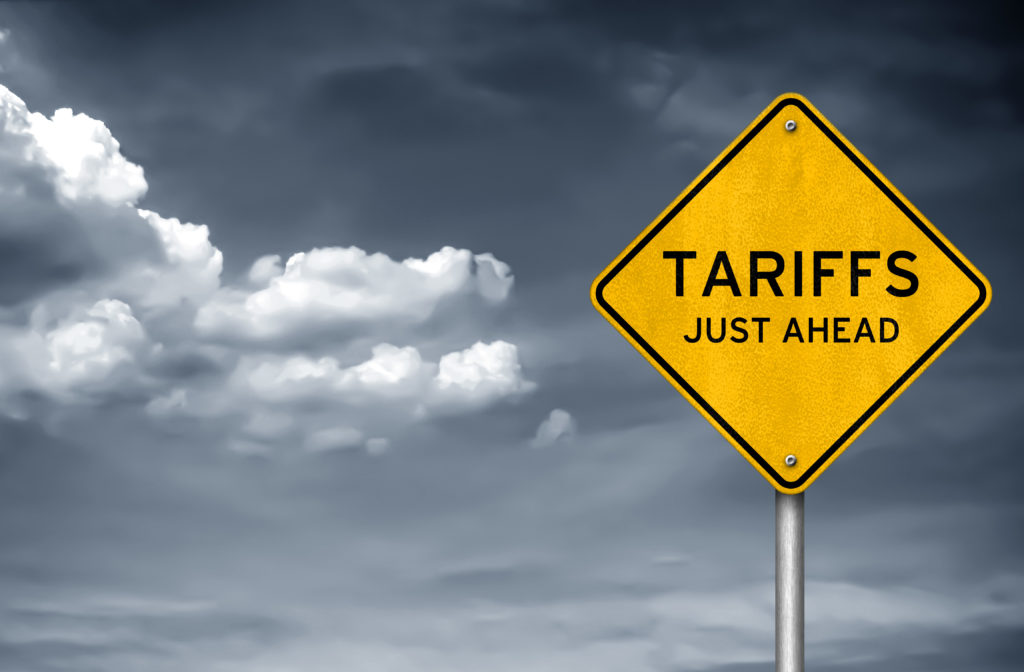 It took some time for investors to finally shake off their complacency and show their discomfort with the reality of higher tariffs.    The mid-June headlines indicating the U.S. would impose $50 billion of tariffs on Chinese exports helped end their lethargy.  In fact, on July 1st only $34 billion will be implemented and principally on agricultural and industrial machinery.  The remainder of the increase—partially on semi-conductors– will be delayed and subject to future hearings. China responded with similar tariff amounts primarily on U.S. agricultural products.    The recent trend of soybean futures (figure 1) shows traders anticipated that move. 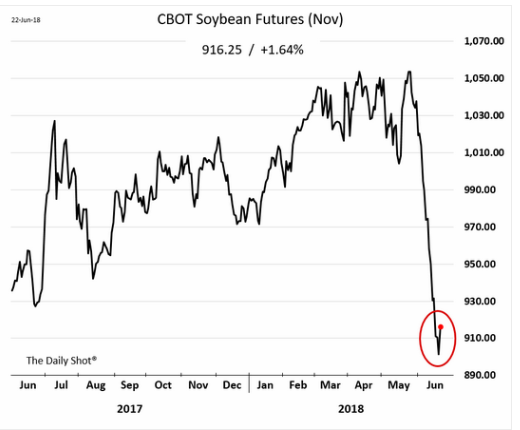 After the mid-June announcement, the administration further threatened to impose higher tariffs on roughly $450 billion of the $506 billion imported from China in 2017.  At the same time, China imported just $130 billion of U.S. goods.  So obviously, the administration senses that China cannot respond proportionately to its tariff threats.  However, China could respond by making it more difficult for American companies doing business in China.  Other tactics China could adopt include weakening the yuan or, less likely, threatening to reduce its holdings of U.S. government debt. The recent decline of the yuan suggests an adjustment already occurred (see figure 2.) 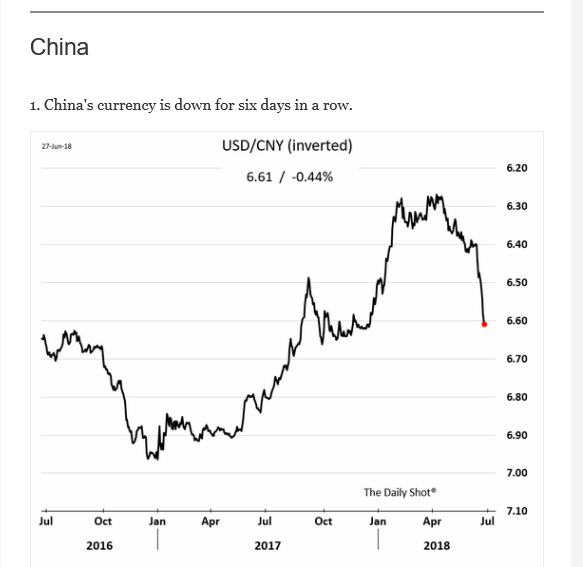 The administration’s underlying concerns center on China’s rapid advancement of its military and technological strategies and goals.  The administration threatened tariffs in attempt to negotiate a limit on China’s access to U.S. corporate intellectual property particularly technology.  The administration also used the same threat to attempt to make it easier for U.S. corporations to operate in China without ultimately fully sharing their proprietary operating and manufacturing systems. At this point, not surprisingly, China shows little willingness to respond to these broadcasted threats.

While investors focus on trade issues with China, an immediate threat may come from the NAFTA negotiations.  The key date comes up at the end of this week.  On July 1, Mexico holds its presidential elections and polls call for the election of the populist candidate Andres Manuel Lopez Obrador known by his acronym AMLO.  Assuming NAFTA negotiations do not succeed by June 30, his election would undoubtedly put off further any possible NAFTA restructuring agreement.  With that, easy congressional fast track approval will be delayed.  Ironically, the election of AMLO pits two populist presidents on opposite sides of these negotiations—AMLO and trump.  With the upcoming mid-term congressional elections, the white house might live up to its past threats and withdraw from NATFA.

Despite the trade war issues, we expect ultimately that world leaders will face up to the need to solve some of the legitimate concerns of this administration.  Perhaps, weaker financial markets and stress on their economies will push through an ultimate agreement.   Alternatively, with the president’s known focus on stock market performance, the evident investor displeasure with his trade fight may move him to a more conciliatory position.   At the end, it takes two to tango.  So far, no one showed up at this dance.

With that expectation, we remain of the opinion that the fed’s normalization policies will prove the most important force effecting financial markets this year and next.  If that proves the case, our view remains that fed normalization efforts will cap stock multiples.  Therefore, companies that can demonstrate above average earnings growth will benefit.  If these stocks suffer from the trade whirlpool, investors should use that opportunity to initiate or add to growth stock positions.

Disclaimer:  Any distribution, copying or disclosure of this article is prohibited. The contents should not be construed as investment advice, unless explicitly stated. Further, this information is not intended as an offer or solicitation for the purchase or sale of any security. Neither data nor other information contained herein (or in the attachments) are warranted as to completeness or accuracy and are subject to change without notice. Any comments or statements made herein do not necessarily reflect the views of Skyview Investment Advisors LLC.  Finally, to the extent that performance information is contained herein, past performance is not necessarily indicative of future returns.

First Capital Advisors Group, LLC is a federally registered investment adviser under the Investment Advisers Act of 1940. Registration as an investment adviser does not imply a certain level of skill or training. The oral and written communications of an adviser provide you with information about which you determine to hire or retain an adviser. First Capital Advisors Group, LLC, form Adv part 2a & 2b can be obtained by written request directly to: First Capital Advisors Group, LLC 512 east township road, 5 valley plaza, bluebell, pa 19422. This is prepared for informational purposes only. It does not address specific investment objectives nor is the content intended as an offer or solicitation for the purchase or sale of any security. An index is a portfolio of specific securities, the performance of which is often used as a benchmark in judging the relative performance of certain asset classes. Indexes are unmanaged portfolios and investors cannot invest directly in an index. An index does not charge management fees or brokerage expenses, and no such fees or expenses were deducted from the performance shown. The standard & poor’s 500, often abbreviated as the S&P 500, or just the S&P, is an American stock market index based on the market capitalizations of 500 large companies having common stock listed on the NYSE or NASDAQ. The Russell 2000 index is an index measuring the performance of approximately 2,000 small-cap companies in the Russell 3000 index, which is made up of 3,000 of the biggest U.S. stocks